The Solar Impulse team aims to circle the earth with a solar and battery-powered aircraft lacking other energy sources (e.g., fuel). To such end, the aircraft must fly non-stop for several days. In particular, driving energy must be provided by highly efficient batteries during the night.

Air Energy is proud to be the specialised partner and battery supplier to this pioneering project.

On 26 June 2009, project initiators Bertrand Picard and André Boschberg presented the first test vehicle, the Solar Impulse I (HB-SIA). This solar-powered aircraft features a wingspan of 63.4 m and is powered by 11,628 solar cells, storing any excess energy in four of Air Energy-supplied battery packs.

Only a revolutionary technology and the most efficient and lightweight materials could make this project a reality. Undeterred by this challenge, we developed a Li-ion energy storage solution from scratch. In this case, Kokam cells delivered an energy density of 243 Wh/kg.

On 7 July 2010, Solar Impulse I flew overnight on battery power alone for the first time. With a state of charge of 40% at sunrise, the aircraft had sufficient battery reserve to ascend during the day, recharge its batteries and, theoretically, fly through another night. 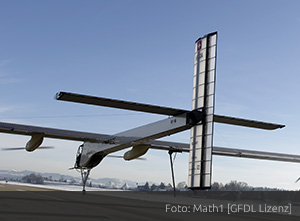 At the end of 2013, following the successful test of Solar Impulse I, Air Energy delivered new batteries for its much larger successor, Solar Impulse II (HB-SIB). The four correspondingly larger batteries from Aachen were refitted with improved cell technology, accounting thus for approximately 25% of the take-off weight. Energy density was increased to 260 Wh / kg.

This aircraft should circle the world in 10 stages spread over 120 days. The first test flights were successfully completed in the spring of 2014, and the round-the-world trip is planned from April to July 2015.